Politics in the United Kingdom has, for a long time, been dominated by three parties: the Conservatives (aka the Tories), Labour and the Liberal Democrats. However, since the last general election in 2010 it has become increasingly clear that this dominance of the traditional parties has been decreasing. As a result it has become more difficult to predict who exactly will form the next government. While it is clear that either the Conservatives or Labour will be the major party, it seems to be highly probable that neither will win enough seats in the House of Commons to govern alone. So a coalition government and/or informal agreements between parties seems likely. But with increasing support for previously minor parties, what can we expect?

That’s a difficult question to answer, not least because the UK uses the first-past-the-post system and not proportional representation. As a result, nationwide opinion polls will only give a rather limited indication of how votes will convert to seats. I’m very definitely not an expert on this subject and will defer to others on how such extrapolations are made. Nevertheless, they are made. What I’m interested in here is how we should show the results of these predictions.

Convention and tradition might suggest use of a pie chart. I have written both here and elsewhere on the perceptual problems of pie charts. As have others. Bar charts (or dot plots) are nearly always preferable because we’re better at judging length and position than we are at judging area and angle. The Guardian, who have been known to use doughnut charts, has gone for a stacked bar while FiveThirtyEight favour a dot plot.

However, a pie chart might actually be a reasonable choice here. There is a class of situations when pies may be perceptually superior: cases when what we really want to do is judge ad hoc sums of the parts that make up the whole. For example, two adjoining sectors of a pie chart form a large sector. Conversely, two neighbouring bars in a side-by-side bar chart do not form a single bar. That doesn’t counter the use of a stacked bar though. That requires a little more explanation first.

There are 650 seats up for grabs, so any party getting 326 or more will have a majority. With a stacked-bar layout we can mark off 325 and fill the bar from either side – in the Guardian’s case with Labour on the left and the Conservatives on the right (appropriately enough). The other parties fill in the gaps in between. The Guardian have gone with the Scottish National Party (SNP) just to the right of Labour and the Liberal Democrats just to the left of the Conservatives.

Naively this makes sense – the SNP “will never put the Tories into government” while the Liberal Democrats were the Conservatives coalition partner for the parliamentary term that has just ended. But with the SNP wanting independence for Scotland, a coalition with the Liberal Democrats would be the more natural preference for the Labour party. Further, both the Labour party and the SNP have both publicly ruled out forming a formal coalition with each other after the election. How can we naturally show all this in the stacked bar chart? We can’t without moving one of the two “main” parties from the position at the end and undermining the basic design. On the other hand, with a pie chart it’s simple. Using the Guardian and FiveThirtyEight predictions as of the 9th of April 2015 we get the pie charts below.

We tend to overestimate acute angles and underestimate obtuse ones, so pie charts usually require labels for accurate interpretation. But we can often make judgement calls about whether an angle covered by one or more sectors is bigger than or less than 180 degrees and that is enough to determine whether the sectors represent a majority. (Note that removing the centre of the pie to create a doughnut chart makes angle judgements much harder and should definitely be avoided!) This is easy if we look at the composition of the Houses of Parliament at the end of the 2010-15 term (below) – clearly no single party has a majority but the angle covered by the Conservatives plus Liberal Democrats is greater than 180 degrees while the angle covered by Labour plus the Liberal Democrats is less than 180 degrees. Even adding in the SNP won’t change that. 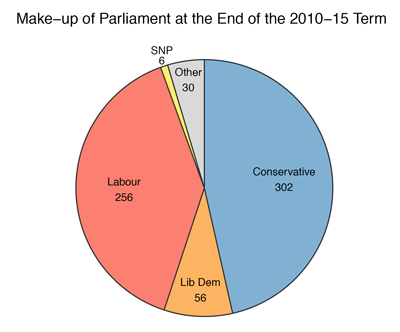 However, with the Guardian predictions for the 2015 elections shown above even the supposedly simple task of judging that the sector formed from Labour and the SNP combined is less than 180 degrees is difficult.

There is a complication. With Sinn Fein likely to win five seats and continue with their policy of “abstentionism” and the speaker remaining neutral, 323 can probably be seen as an effective majority (it may be enough to win a confidence vote). While Labour plus the SNP together are some way off that target in the FiveThirtyEight prediction, they exceed it by 1 in the Guardian prediction. Can you tell that from the adjusted pie charts below? 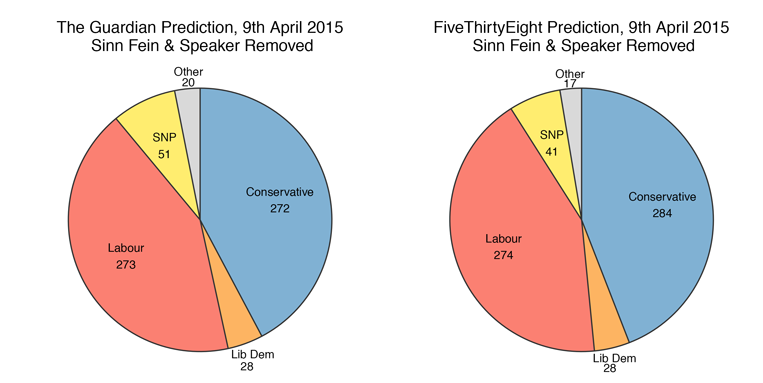 Clearly with both predictions Labour, the Liberal Democrat and the SNP could form a majority government (even if they say they won’t). But these are just predictions with sizeable margins of error and based on the current state of things. And that means other smaller parties could still have a say.

Despite being in the news a lot (not always for positive reasons) the right-wing UK Independence party may only win a handful of seats. The Democratic Unionist Party in Northern Ireland will probably win more. There’s also an independent who used to represent the Ulster Unionist Party. All these MP’s would presumably favour a Conservative government.

That leaves the Green Party, the Social Democratic and Labour Party in Northern Ireland and Plaid Cymru in Wales who will likely favour Labour.

The result of all this is that the “Other” parties are likely, overall, to vote to back a Conservative government more than a Labour-led one (though not as one big bloc!). It would be nice to add all these different parties to the pie chart. We could put the DUP and UKIP next to the Conservatives and the others next to the SNP to make adding up of potential coalition sectors easier. But a fundamental limitation of a pie chart is that it just doesn’t work with lots of small component sectors.

Another fundamental, and perhaps more critical, limitation is ability to show margin of error. I don’t know how one could do such a thing with a pie chart. This is also difficult with a stacked bar. By contrast, it’s easy with a side-by-side bar chart or a dot plot, as exemplified by FiveThirtyEight.

Maybe a pie chart is only any use when the final numbers are in and we want to hunt for potential majority coalitions without having to do any mental arithmetic? But even this seems to depend on the smaller parties (in terms of seats) not playing a role. And if it comes down to picking combinations from the four biggest parties it’s fairly easy to just show the possibilities as separate stacked bars (as here) or using a simple table. So even in this situation where perceptual research suggests pie charts may have a distinct advantage over bar charts, they’re probably only of fairly limited use.

This entry was posted in Chart design and tagged bar, general election, pie on April 10, 2015 by Tim Brock.