Jeff Tollefson reports for the Nature News Blog that the latest round of UN climate talks ended “with a whimper”. The cynic in mean thinks: “just like almost every other UN climate conference then”.

One of the problem is, I think, that it’s all too easy to find a clever way of blaming somebody else. Or at least claiming something along the lines of “there’s no point us doing anything until Country X does something”. That’s because there are many different ways of taking the same set of numbers and creating different rankings.

Global Carbon Atlas have an interesting interactive visualisation on their website that presents various chunks of data relating to carbon dioxide emissions from fossil fuels. It also allows the user to download spreadsheets of these data for their own perusal. To clarify my point above I took a little of this (references are at the bottom) and created the table graphic below. 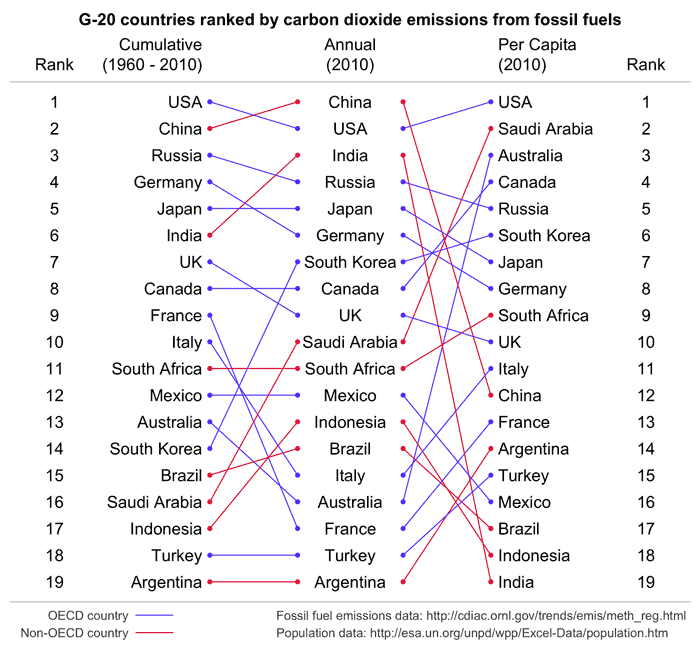 The table graphic ranks the nineteen countries of the Group of Twenty Finance Ministers and Central Bank Governors, aka the G-20, according to three simple ranking systems relating to carbon dioxide emissions:

The start date for the cumulative emissions, 1960, is the start date in the dataset and is not meant to constitute a date of specific importance. To add a little extra context, the lines linking the columns are colour-coded according to whether or not the associated country is a member of the Organisation for Economic Co-operation and Development, aka the OECD. The idea of this is to give an indication of whether the country in question might be considered a developed or a developing country, although membership of the OECD doesn’t strictly define a country as being developed. Similarly, non-membership does not necessarily mean a country should be classed as developing. It should be noted, that for the third category, some countries that lie outside the G20 (eg Qatar and Luxembourg) would be ranked above the United States. It should also be noted that the data refers to the country of emission, rather than the country where any end products are consumed.

No one country comes out as “worst” (ie top ranked) on all three rankings and the biggest annual emitters, the USA and China, can also claim to be the biggest investors in renewable energy.

Basically, my point is that, if you find yourself saying “there’s no point us doing anything about our carbon dioxide emissions until…” you should maybe think again. Or at least have a really good explanation as to why the ranking system you chose to support your case should be seen as superior to all the other systems that don’t.

If you’re curious as to how these rankings have changed over time then you can experiment for yourself through this very simple R Shiny app I created.

There’s also this gif which animates the changes in steps of five years.

This entry was posted in Interpreting data and tagged carbon dioxide, R, Shiny, table graphics on November 29, 2013 by Tim Brock.