It’s safe to say the 2015 UK general elections did not go as pollsters predicted. Rather than a hung parliament and uncertainty, we got a (slim) Conservative majority. This is despite the Conservatives winning (just) under 37% of the vote. Even bigger discrepancies can be seen when considering the more radical mainstream parties – the Greens and UKIP (on opposite sides of the political spectrum). Between them they won over 16% of the vote but only two of the 650 available seats. In Scotland, the SNP took 56 of the 59 available seats, despite only getting half of the votes cast. And in Northern Ireland the DUP won twice as many seats (8) as Sinn Fein, despite only managing 8,000 more votes. The bar chart below shows these results. The black markers (not at integer locations!) show the share of seats each party that actually won a seat would have won if there was a perfectly proportional relationship between seats awarded and votes cast. I’ve also included the Alliance Party of Northern Ireland (for reasons that will become clear) even though they lost their only seat in the election. 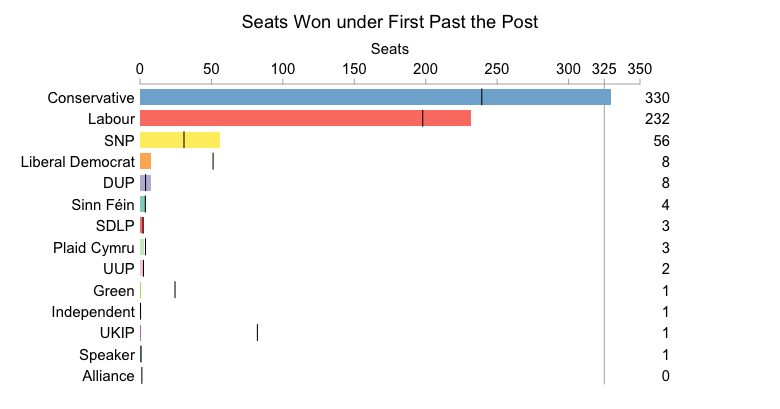 The large discrepancy between votes cast and seats won has led to renewed criticism of the UK’s First Past the Post (FPTP) voting system which wasn’t designed with a many-party system in mind. However, since the two largest parties (both in terms of votes and seats won) do quite well out of the system, it seems improbable that any change is likely in the near future. But it’s fun to experiment anyway.

Both the BBC and channel 4’s FactCheck (and probably others) have attempted to show what the results would look like using proportional representation and the d’Hondt method. As far as I can tell, both calculations are based on the popular vote for the whole of the UK. That is, all votes from all seats are pooled to their respective parties and then the number of seats for each party calculated based on that one pool. I’ll call this “UK-wide PR”. The results I get using this method are shown below (using the data compiled by the House of Commons library). 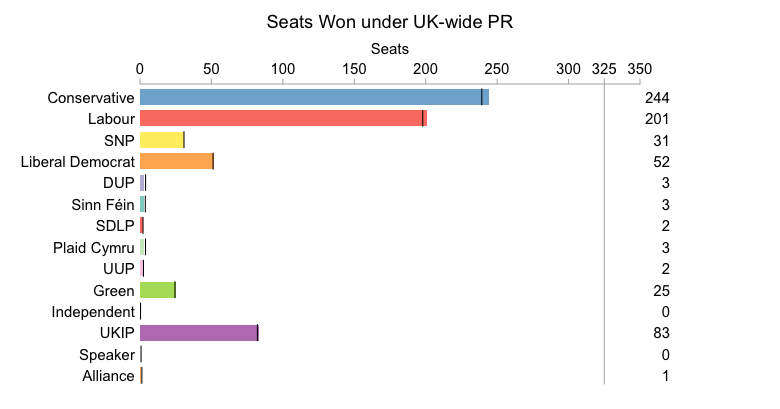 Compared to FPTP, the Conservatives lose 86 seats while UKIP gain 82 and the Greens 24 (I’ve included the Greens as a single party, when there are actually three separate parties in the UK). The Alliance Party also gain 1 seat (hence their inclusion earlier). The Speaker and Sylvia Hermon (the Independent) lose their seats because they only stand in one seat each.

As you can see, the PR system here doesn’t really work for independents. And, of course, people don’t vote in FPTP elections as they would in a proportional system. In reality it seems likely that support for minor parties would be bigger if people thought they might win seats in a proportional system, so FPTP is probably even more unrepresentative that it seems. Nevertheless, this is the best data I have and I still think it’s interesting to compare and contrast.

UK-wide PR is a much better match to votes cast than FPTP. That’s unsurprising since that’s exactly what it’s designed to be. But no elected official represents any one area. The Scottish National Party members wouldn’t even specifically represent Scotland! We can change that and break seats and votes down by nation. That is, pool the votes from all 533 English constituencies and use the d’Hondt method to assign 533 seats to parties and repeat this procedure for the 18 seats in Northern Ireland, the 59 seats in Scotland and the 40 seats in Wales. 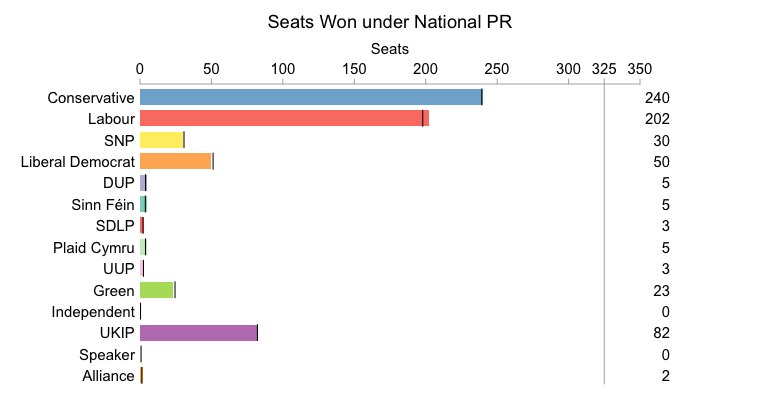 There’s not actually much difference between UK-wide PR and this National PR. We can take localism a step further and assign seats in England based on collections of regions as assigned in the data file. We thus have, for example, 84 seats to distribute from the pooled votes in the South East and 29 from those in the North East (plus votes from Northern Ireland, Scotland and Wales). The results of this Regional PR are shown below. 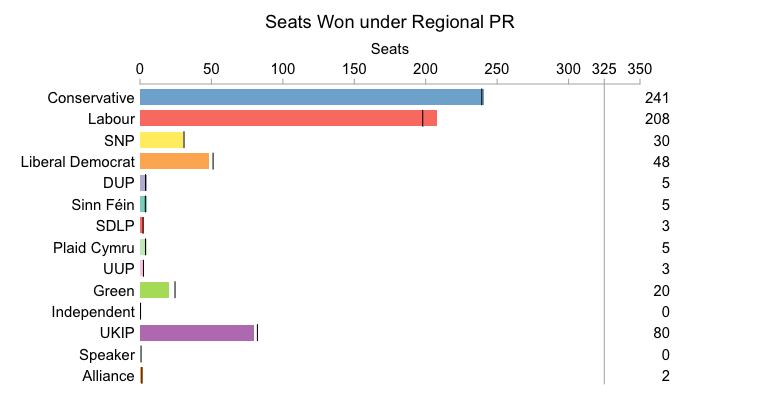 Things are still fairly close to proportional and we have some sense of link between elected officials and places, even if these places are much bigger than FPTP constituencies.

Subtract the number of seats won under a given system from the number of (non-integer) seats a party should win under a completely proportional system allows for easier visual comparisons of voting systems. I’ll call these differences the seat discrepancies. These are compared for FPTP and Regional PR in the dot plot below. 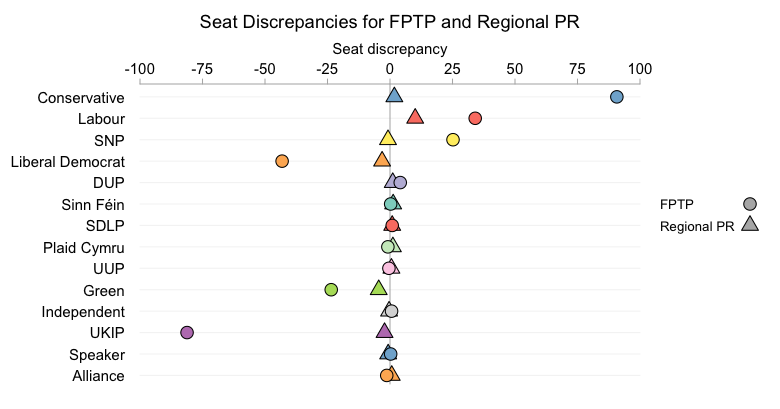 The difference between FPTP and even the most localised version of PR are clearly huge. The latter is much more proportional or representative of the votes cast.

Below is a comparison of the three different PR systems featured previously. Note the difference in scale used from the chart above. 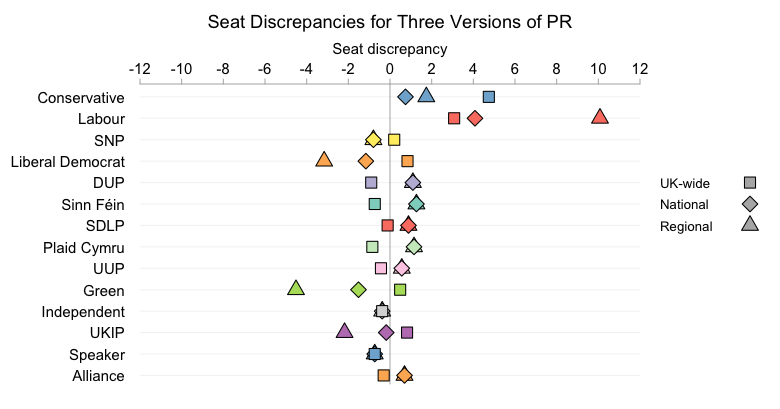 The biggest discrepancy here is that Labour would win ~10 more seats under Regional PR than they “should”.

As already hinted at, one of the chief advantages of FPTP is that voters get to vote for a specific local representative. However, the flip-side is that only (almost exactly) 50% of voters in the UK voted for the MP that won in their constituency. By contrast, under Regional PR, 98.7% of voters would have at least one representative for their region from the party they voted for.

Various indices have been created for the purpose of measuring the disproportionality of an election. One of the simplest is the the Loosmore–Hanby index:

Thanks to Oli Hawkins for cross-checking some of the calculations above.

The PR seat assignments were calculated using the R script below.

This entry was posted in Politics and tagged general election, R on June 19, 2015 by Tim Brock.