With just a few days to go before the UK general election, the Guardian and ICM published the results of a poll of 501 Sheffield Hallam constituents. Sheffield Hallam is particularly interesting because the incumbent is the leader of the Liberal Democrats, and Deputy Prime Minister, Nick Clegg. Recent polls have suggested a real possibility he could lose his seat this week.

From the article by Tom Clark:

“The poll puts Clegg on 42%, seven points clear of his young Labour rival, Oliver Coppard, who is on 35%. Ian Walker, the candidate for the Conservatives, is on 12%.

But Clegg achieves his seven-point lead only because almost half the people (48%) who say their nationwide preference is for the Conservatives are planning to support the Lib Dem leader.

When ICM asked voters which party they would prefer if they put the local context and candidates out of mind, Labour is ahead on 34%, with the Lib Dems on 32% and the Conservatives on 21%.”

This is the visual presentation of the results in the article: 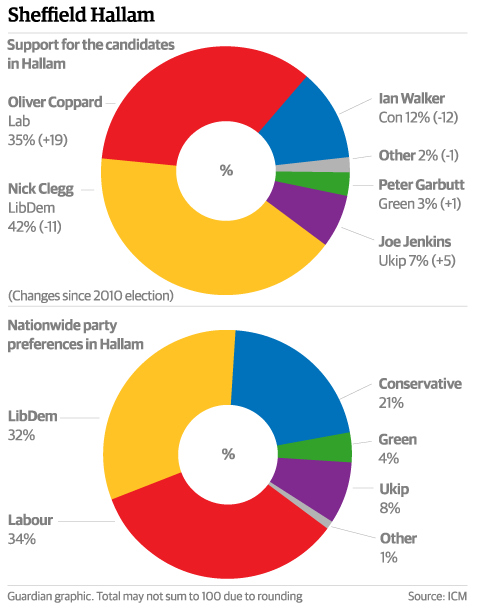 I think a slopegraph provides a much more informative view of the data: 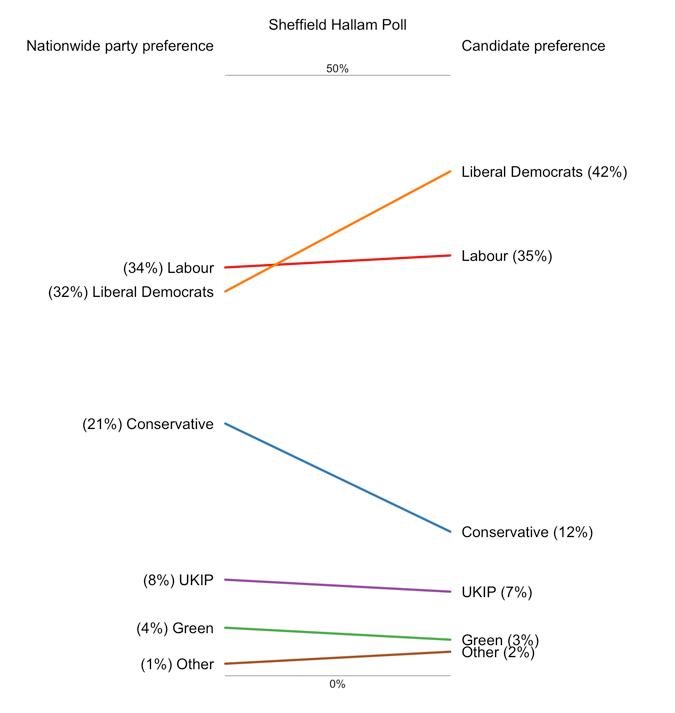 It’s much harder to tell that Labour has the lead in terms of party preference from the doughnut chart – it’s pretty difficult to tell the difference between an annulus sector that covers 32% of a circle and one that covers 34%. With the slopegraph you just have to judge which line is higher on the left.

While things are clearer for the party preference, the fact that the Labour share is actually (slightly) bigger for the candidate preference than the nationwide preference is not at all obvious from the doughnuts (without reading the labels). Comparing variations on a pie chart is rarely easy due to the discordant arrangement of sectors and labels.

Most significantly, I think, we can see from the slopegraph the almost mirrored trajectories of the lines for the Liberal Democrats and Conservatives, indicative of the “‘Breathtaking’ surge of Tory tactical votes” noted in the title of the Guardian article.

One limitation of the slopegraph is that, like pie chart variants, there isn’t a trivial method for showing the uncertainty in the results. Given the relatively small sample size, this is several percentage points, which could make all the difference.

This entry was posted in Politics and tagged pie, slopegraph on May 5, 2015 by Tim Brock.