Turning out in numbers

On the 18th of September 2014 Scotland’s residents voted on whether it should become an independent country. The date for the referendum had been set back in March 2013 and it had seemed like a foregone conclusion that the result would be “No” right up until the last couple of weeks of campaigning.

Following an apparent victory for Scotland’s First Minister (and leader of the Yes campaign) Alex Salmond in the second and final televised debate with Alistair Darling of the Better Together (aka No) campaign their were murmurings that perhaps the result wouldn’t be quite so clear cut. (Personally, I watched this debate and thought both leaders failed to make even remotely believable arguments.) But it wasn’t until a YouGov poll for the Sunday Times on the 7th September that suggested the Yes campaign might have a narrow lead that politicians in London seemingly went in to a blind panic, proposing a range of (vague) incentives for the Scottish electorate to vote No and preserve the Union.

Having gone from foregone conclusion to “too close to call” in the last few weeks before the referendum, results night ended up being something of a damp squib. The chart below tracks the difference between the total number of No and Yes votes as results came in from the Scottish councils during the early hours of the 19th of September. (Times come from watching BBC’s results programme “Scotland Decides”. Not every declaration was covered live so times are approximate only). 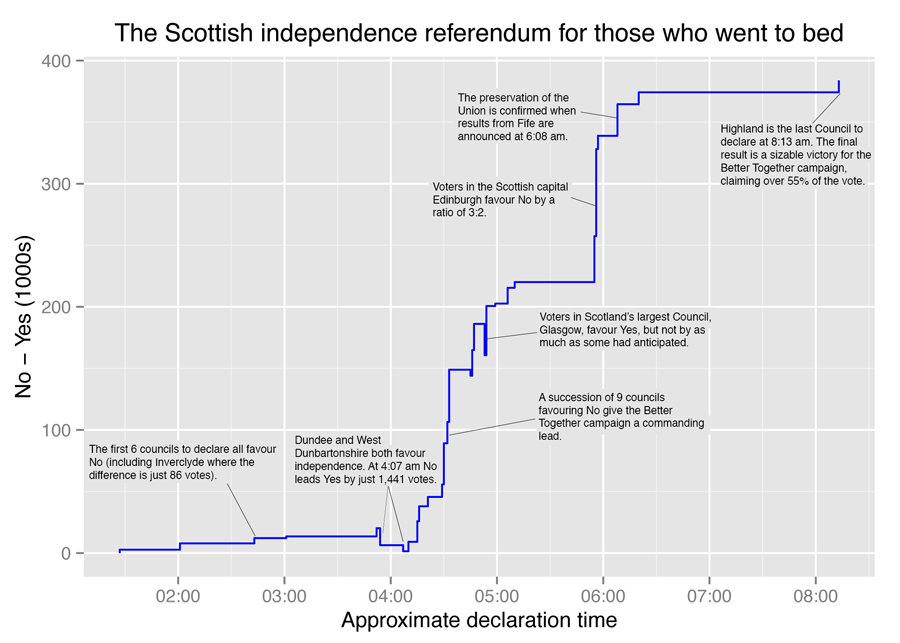 Even around 4 am when a couple of consecutive declarations favouring the Yes camp pushed the cumulative difference between No and Yes votes down to just over 1,400 votes, it seemed clear from the experts on the BBC’s panel that we were still headed for a clear No victory.

In the end the difference was over 10 percentage points, leading the Daily Mail to ask whether the YouGov poll had cost Britain £45 billion? Peter Kellner of YouGov has strongly denied this.

While the actual result of the independence referendum may have gone as originally predicted, there has been much talk of big changes in British politics (but also accusations by Salmond that the leaders in Westminster won’t deliver on the incentives offered just days before the vote). Scotland might be getting “devo-max”, England might get its own parliament or even regional parliaments.

Whether these things comes to pass we will have to wait and see, but there is something else unprecedented from this vote: turnout. The histogram below shows the turnout split by council. 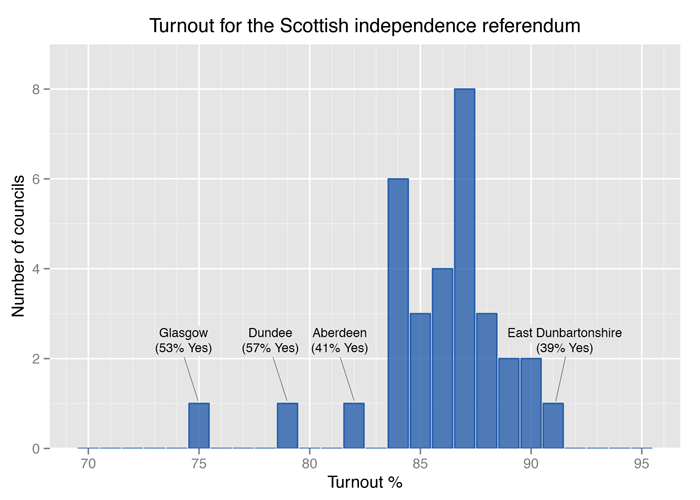 Without reading the numbers, the turnouts in Glasgow and Dundee – two of only four councils to return a majority Yes vote – might appear to be on the low side. However, compared to other national votes, the turnouts of 75% and 79% are very healthy. The boxplots below compare the turnout for the Scottish independence referendum with other recent national votes using Scottish administrative regions only. Data comes from the Electoral Commission website. (The 2011 Scottish Parliament election vote was run concurrently with the referendum on preferred voting system. Unsurprisingly the turnouts for the two votes are almost identical.) 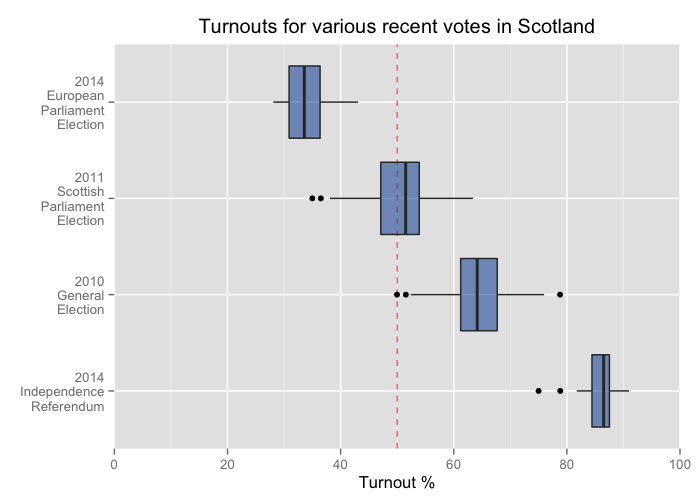 Clearly the turnout for the independence referendum was huge compared with other recent votes. Even in Glasgow and Dundee it was significantly higher than the average in the last general election. The overall total was 84.6%, higher than any Scotland-wide or UK-wide vote since the introduction of universal suffrage.

Conversely, the European Parliament elections in May of this year saw just 33.8% of the Scottish electorate turn up and vote. In Glasgow it was only 28.6%. Despite all the attention that the UK Independence Party got around those elections and Nigel Farage’s talk of political earthquakes, two-thirds of eligible voters in Scotland didn’t bother to vote. Figures weren’t much higher in the rest of the UK. It wasn’t talk of the UK exiting Europe that got people out to vote in 2014, it was the (seemingly very real) possibility of Scotland exiting the UK. It’s perhaps too soon to say whether this led to a political earthquake.

This entry was posted in Politics and tagged politics, referendum, Scotland, voting on September 23, 2014 by Tim Brock.

2 thoughts on “Turning out in numbers”