In 1609 Galileo built his own telescope (or “spyglass”) and wrote down what he saw through it. Some of his earliest discoveries are described in the pamphlet Sidereus Nuncius (Starry Messenger). A translation (with highly informative footnotes) can be found here. It’s probably the most remarkable thing I have ever read.

The first half of the publication is devoted to the study of the moon, in which Galileo convincingly describes how patterns of shadow and reflected sunlight give clear evidence of the Moon’s highly uneven surface.

“On the fourth or fifth day after new moon, when the moon is seen with brilliant horns, the boundary which divides the dark part from the light does not extend uniformly in an oval line as would happen on a perfectly spherical solid, but traces out an uneven, rough, and very wavy line as shown in the figure below. Indeed, many luminous excrescences extend beyond the boundary into the darker portion, while on the other hand some dark patches invade the illuminated part. Moreover a great quantity of small blackish spots, entirely separated from the dark region, are scattered almost all over the area illuminated by the sun with the exception only of that part which is occupied by the large and ancient spots. Let us note, however, that the said small spots always agree in having their blackened parts directed toward the sun, while on the side opposite the sun they are crowned with bright contours, like shining summits. There is a similar sight on earth about sunrise, when we behold the valleys not yet flooded with light though the mountains surrounding them are already ablaze with glowing splendor on the side opposite the sun. And just as the shadows in the hollows on earth diminish in size as the sun rises higher, so these spots on the moon lose their blackness as the illuminated region grows larger and larger.”

It might seem obvious today that the Moon has a rough surface, but at the time it was a widely-held belief – largely thanks to Aristotle – that all the celestial bodies were perfectly smooth. Galileo’s explanatory sketches of the moon are also exquisite:

He then turns his attention to the stars and what I find the most astonishing part of the treatise:

“In the first I had intended to depict the entire constellation of Orion, but I was overwhelmed by the vast quantity of stars and by limitations of time, so I have deferred this to another occasion. There are more than five hundred new stars distributed among the old ones within limits of one or two degrees of arc. Hence to the three stars in the Belt of Orion and the six in the Sword which were previously known, I have added eighty adjacent stars discovered recently, preserving the intervals between them as exactly as I could. To distinguish the known or ancient stars, I have depicted them larger and have outlined them doubly; the other (invisible) stars I have drawn smaller and without the extra line. I have also preserved differences of magnitude as well as possible.” 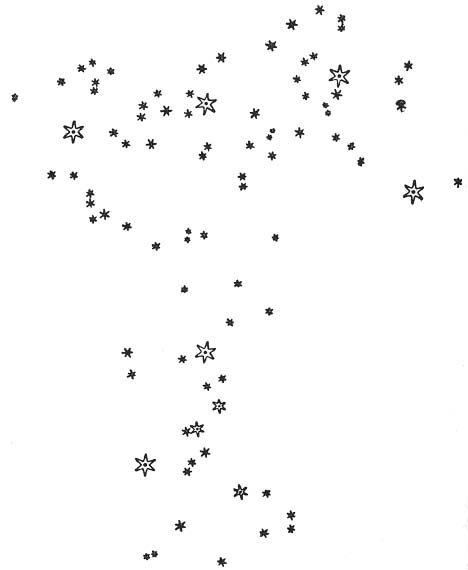 In essence, Galileo had discovered that the Universe that had been observable to the naked eye to everyone was only a small fraction of what was really out there. As discoveries go, that takes some beating.

He goes on to conclude that the Milky Way is “in fact, nothing but a congeries of innumerable stars grouped together in clusters” and then that “the stars which have been called “nebulous” by every astronomer up to this time turn out to be groups of very small stars arranged in a wonderful manner”. This is actually an over-extrapolation. While many of the previously known “nebulous” regions were in fact star clusters that could not be resolved, nebulae of gas and dust (and early stars) are very real. In fact the Orion nebula sits in Orion’s sword. There’s some debate about how Galileo missed this.

Galileo ends by discussing “the matter which in my opinion deserves to be considered the most important”. He recounts that on the 7th of January 1610 he turned his telescope on Jupiter and noted, with curiosity, three small, bright “starlets” lying in a straight line. Observations on subsequent nights show them moving with respect to Jupiter in a manner quite unlike that which would be expected of stars. Galileo illustrated this with simple but effective little diagrams and the whole passage in Starry Messenger makes for an enthralling read (see also chapter 6 of Edward Tufte’s Envisioning Information).

By the 11th of January Galileo knew what he was seeing:

“I had now decided beyond all question that there existed in the heavens three stars wandering about Jupiter as do Venus and Mercury about the sun, and this became plainer than daylight from observations on similar occasions which followed. Nor were there just three such stars; four wanderers complete their revolutions about Jupiter”.

This was not only contrary to the still-widely-believed Ptolemaic model of the Universe – that everything revolved around the Earth – but also clear evidence that it wasn’t just a combination of the Earth and Sun that bodies orbited. It would be nice to say that this led to a sudden and immediate paradigm shift away from geocentrism, but that was far more gradual and less dramatic over the course of the following century or so. Galileo seemed well aware of the implications of his discoveries:

“Here we have a fine and elegant argument for quieting the doubts of those who, while accepting with tranquil mind the revolutions of the planets about the sun in the Copernican system, are mightily disturbed to have the moon alone revolve about the earth and accompany it in an annual rotation about the sun. Some have believed that this structure of the universe should be rejected as impossible. But now we have not just one planet rotating about another while both run through a great orbit around the sun; our own eyes show us four stars which wander around Jupiter as does the moon around the earth, while all together trace out a grand revolution about the sun in the space of twelve years.”

As a research student I was really excited when I first discovered something new, something (I’m pretty sure) nobody had ever seen before. That was just evidence of a new state in a somewhat exotic isotope that’s of no interest to anybody outside of nuclear physics. Galileo, on the other hand was redefining – on a nightly basis – humankind’s place in the Universe. I can’t begin to comprehend how that must have felt.

Of course the move from geocentrism to heliocentrism and beyond wasn’t just down to Galileo. I found the following passage particularly interesting in view of what was to come:

“It is also observed that the revolutions are swifter in those planets which describe smaller circles about Jupiter, since the stars closest to Jupiter are usually seen to the east when on the previous day they appeared to the west, and vice versa, while the planet which traces the largest orbit appears upon accurate observation of its returns to have a semimonthly period.”

While there’s no formal measurement, this is consistent with Johannes Kepler’s third law of planetary motion – “The square of the orbital period of a planet is proportional to the cube of the semi-major axis of its orbit” – that would be published around a decade later. Sure enough, the orbits of the Jovian moons were found to be consistent with this law.

But this law was empirical. Isaac Newton, born 11 months after Galileo’s death, would go on to explain Kepler’s third law in terms of his universal law of gravity and his second law of motion (here’s my workings for a circular orbit if you’re curious). Newton’s law of gravity is more significant than this this though, unifying the physics of the terrestrial with that of the celestial. It highlighted that, in reality, the Earth is nothing special.

But, I think, the Earth being nothing special is a good thing. We can mess it up (though I’d really rather we didn’t) and the Universe will carry on regardless. More positively, there’s things to find that are far more beautiful and astonishing and weird than we can ever experience if we only look at what’s right in front of us.

This entry was posted in Science and tagged astronomy, space, the Universe on February 24, 2015 by Tim Brock.