I recently got into a debate on Twitter with a vaccine “sceptic”. She wanted to know why – if the MMR (measles, mumps and rubella) vaccine was so good – 5 of 67 people diagnosed in the recent measles outbreak associated with Disneyland (her numbers, veracity unclear) were vaccinated.

I politely (I think) pointed out to her that the vaccine wasn’t 100% effective. I found something that I thought said it was 95% effective per person per injection (don’t trust this number, see later). She then proceeded to call me “illiterate” because 5 out of 67 people corresponds to more than 5% (ie 100-95). This is wrong for (at least) two reasons. First, clearly without at least an estimate of the number of vaccinated people exposed to measles we cannot possibly estimate the effectiveness of the vaccine. 5/67 is clearly more than 5% but is not in anyway a measure of effectiveness. Secondly, if 67 did just so happen to be the number of vaccinated people who were exposed to measles, then 5 is an entirely reasonable number of people to expect to become infected based on a (hypothetical!) 95% level of effectiveness. That’s simply due to statistical fluctuations. We can use the binomial distribution to see this – with a 5% chance of any one exposed vaccinated person becoming infected there’s actually a (slightly greater than) 24% chance that at least 5 out of 67 exposed people become ill. This can be seen in the chart below where the line shows the cumulative probability from 5 people upwards. 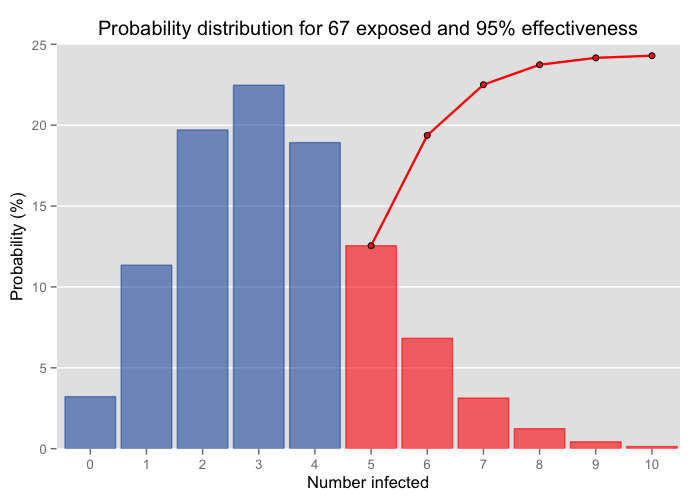 Without putting a definitive number on it, it’s still straightforward to conclude that the vaccine is highly effective if we assume the 5 out of 67 figure to be accurate. Why? Because most of the population is vaccinated (see here for child vaccination rates in the USA) while most of the infected are not.

Sadly my Twitter acquaintance is not the only person to fall into this trap. Here’s Sayer Ji of GreenMedInfo.com getting it completely and utterly head-desk-smashingly wrong:

“This erroneous thinking has led the public, media and government alike to attribute the origin of measles outbreaks, such as the one recently reported at Disney, to the non-vaccinated, even though 18% of the measles cases occurred in those who had been vaccinated against it — hardly the vaccine’s claimed “99% effective.””

Sorry Sayer Ji, but even if the percentage of measles cases being in the vaccinated is as high as 18% that is still clear and unambiguous evidence that the vaccine is extremely effective given even rudimentary knowledge of vaccination rates. And while we’re here, here’s what the latest scientific research (Luke E. Taylor, Amy L. Swerdfeger, Guy D. Eslick, Vaccine Volume 32, Issue 29, 17 June 2014, Pages 3623–3629 ) is telling us about vaccines and autism (my emphasis):

From Jennifer Schmid on earthbasedmedicine.com:

“At the same time, don’t believe when they say that anyone who has been vaccinated against measles is “perfectly safe” from getting the disease. This is also not true. Vaccination is less than 100% effective, even if everyone has been vaccinated. A 1984 “outbreak” of 21 measles cases in Illinois occurred in a “school population with a documented immunization level of 100%.” In fact, in this current outbreak, approximately 20% of the cases have come from people who were fully vaccinated, i.e., they received at least two shots. This goes against the current belief that being fully vaccinated confers immunity in 98%-100% of the population.”

The first half of this paragraph is little more than a straw man construction: falsely insinuate that proponents frequently claim it’s 100% effective and then go on to show that this isn’t.

The case from 1984 is interesting, though Schmid’s short description isn’t completely accurate. Only 16 of the 21 cases were from the vaccinated school population. Four of the remaining five cases were of unvaccinated children who had not yet started school. 260 children in the high school were unaffected while all 135 children in the junior high school that shared the building were also not ill. That is to say, “only” 4% of the total (child) school population fell ill. Schmid also fails to mention the closing remarks in the article which completely contradict the claims she is trying to make (my emphasis):

It’s worth highlighting that the case in question is over thirty years old. And statistical anomalies occur from time to time. As one looks back over a longer and longer time frame, the chance of finding a statistically improbable event becomes more and more probable.

The second half of Schmid’s paragraph above should look familiar. Once again our vaccine “sceptic” has confused the effectiveness of the vaccine in question and the percentage of the infected that were vaccinated.

This entry was posted in Science and tagged measles, statistics, vaccinations on January 29, 2015 by Tim Brock.