I recently wrote a couple of blog posts (part 1, part 2) about the potential cost of collecting Panini’s 2014 World Cup stickers. Subsequently these stickers have been back in the news after former Manchester City striker Mario Balotelli filled the Italy page of the Panini album with stickers of himself. Naturally a question arose in my head (and not just mine) about how much that would cost assuming Mario collected them all in the conventional manner (and without swapping).

It’s not entirely clear just how many stickers of himself Mario collected. The Guardian suggests 14 but there are 19 Italy players in the album. In-line with James Offer I’ll go with the latter. (The end results for the former can be found here.)

Just one small change was needed to the code from my original Panini stickers post to be able to simulate this most serious of problems. (For those interested, this basically amounted to changing the condition in the while loop to be TRUE so long as less than 19 of Mario’s sticker number had been collected.) This change took considerably less time than actually running the 10,000 trials of the simulation (the latter taking about quarter of an hour). As previously, a histogram neatly summarises these results: 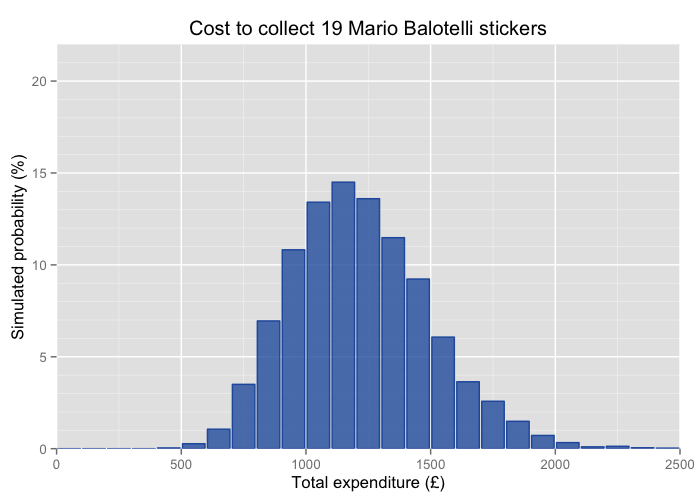 From the simulations, the mean cost of collecting nineteen Mario Balotelli stickers is £1,218 (assuming the stickers were being bought in the UK). As always, the mean doesn’t tell the whole story. A handful of the 10,000 trials came in at under £500 while over 60 cost in excess of £2,000. More notably, the standard deviation of the data is £277.

After running the simulation I realised that this sticker collection problem is actually mathematically much simpler than the problem of collecting at least one of every sticker. If we ignore the fact that the stickers come in packs of 5 at 50p but instead pretend they come in packs of 1 at 10p then the probability distribution of the number of cards required to reach our goal should follow a negative binomial distribution.  The total cost then follows the same distribution but with everything shifted down by a factor of ten (since you get ten cards to the pound).

Aside: The most confusing thing about the negative binomial distribution is that it is defined inconsistently. While it might seem obvious that we would think of collecting a Mario Balotelli sticker as being a "success", in some text books this would be labelled "failure". I assume this terminology stems from the fact that the negative binomial distribution is frequently used to model expected failure rates.

Mathematical definitions are also inconsistent as to whether the distribution models the total number of events before a goal is reached or just the number of failures (or successes). When successes are fairly common this can make a big difference. When, as in the current case, successes are rare this should only make a small difference.

In short: be careful.

In fact we can use the probability distribution function of the negative binomial distribution to do a broader visual comparison between simulation and mathematical expectation: 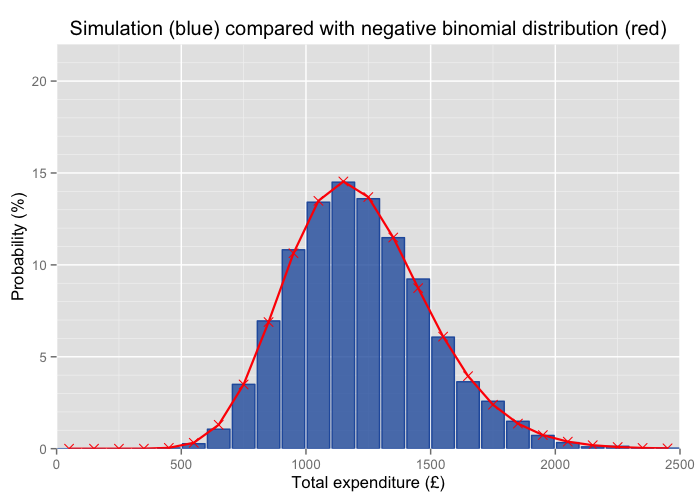 How many trials is enough?

Clearly the agreement between simulation and mathematical expectation is very good. But you may think 10,000 trials may seem excessive and you’d probably be right. But it’s interesting to see how good the simulation is with fewer trials. We can do this with relevant numbers like mean and standard deviation and/or we can do this visually. The animated gif below combines the two, showing the results of the first ten trials, the first twenty trials and so on. Clearly the mean and standard deviation are liable to change more quickly when there are only a few trials so the step-size between images is increased systematically, shifting from 10 to 100 after 100 trials and from 100 to 1,000 after 1,000 trials. Click the image to (re)start the animation:

With only a couple of hundred trials the simulations reproduce the expected mean and standard deviation well. Qualitatively, to get a close match between the two distributions requires a further order of magnitude increase in the number of trials.