Stick with me on this one: redux

I recently published an article about the potentially high cost of collecting Panini’s 2014 World Cup stickers. Shortly after it was pointed out to me that it’s possible to buy your last fifty stickers (or fewer) via the Panini website. In the UK the cost for doing so is 14p per sticker. My initial thought was “but that’s cheating”. But then I remembered there aren’t actually any rules to this sort of thing. So I decided this was worth a brief blog post of it’s own. If you haven’t read the original post it’s probably worth doing so now before continuing (otherwise things might not make a lot of sense).

Since the initial simulations stored the number of unique stickers collected after each pack was purchased, there was no actual need to simulate any more data. All that was required was to look at costs up to and including the pack at which the 590th unique sticker was collected and then add on 14p for each remaining sticker. (This will generally mean an extra £7, although it could mean slightly less if additional unique stickers were picked up in the same pack as the 590th.) Another neat benefit of reusing old data is that we can directly compare how the data correlates between the two models – are high-cost trials from what we’ll call the Original Model correlated with high cost trials in the new Alternative Model?

We can compare the two distributions directly side-by-side (the Original Model data is the same as that of the first chart in the original blog post but with finer binning): 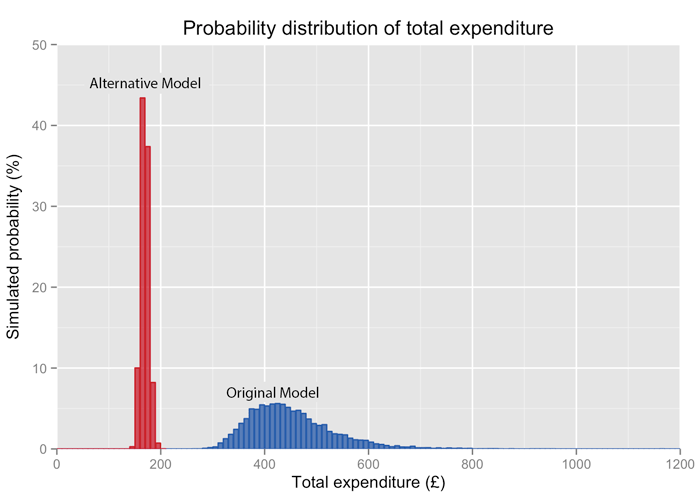 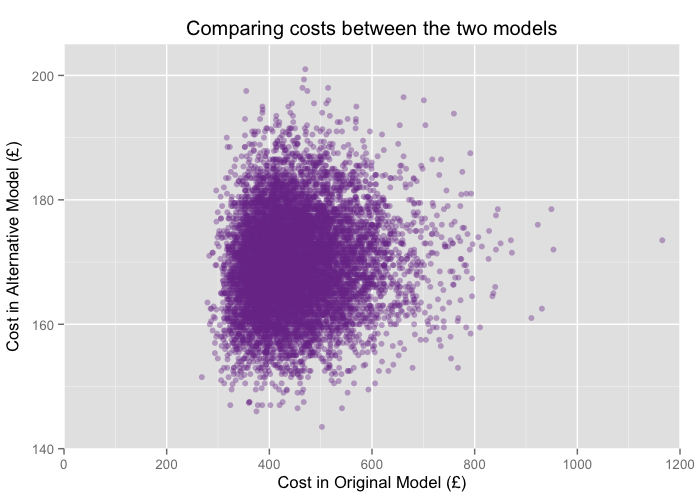 In short: the models have identical pathways for the first 590 of 640 cards (ie 92%) but the end results are very very different. Oh, and because cost was our original concern, it should also be noted that you can save yourself a lot of money by taking Panini up on their offer to sell you your missing cards… so long as you don’t think that’s cheating.

This entry was posted in Simulation and tagged football, Monte Carlo simulation, R, stickers on May 19, 2014 by Tim Brock.